The Largest, Stinkiest Flower In The World

Rafflesia is the largest flower in the world, weighing around 7 kg, and it can grow more than a meter across! This flower releases chemicals, such as sulfur, that mimic the smell of rotting flesh, which leads to its other popular name — the corpse lily or corpse flower. 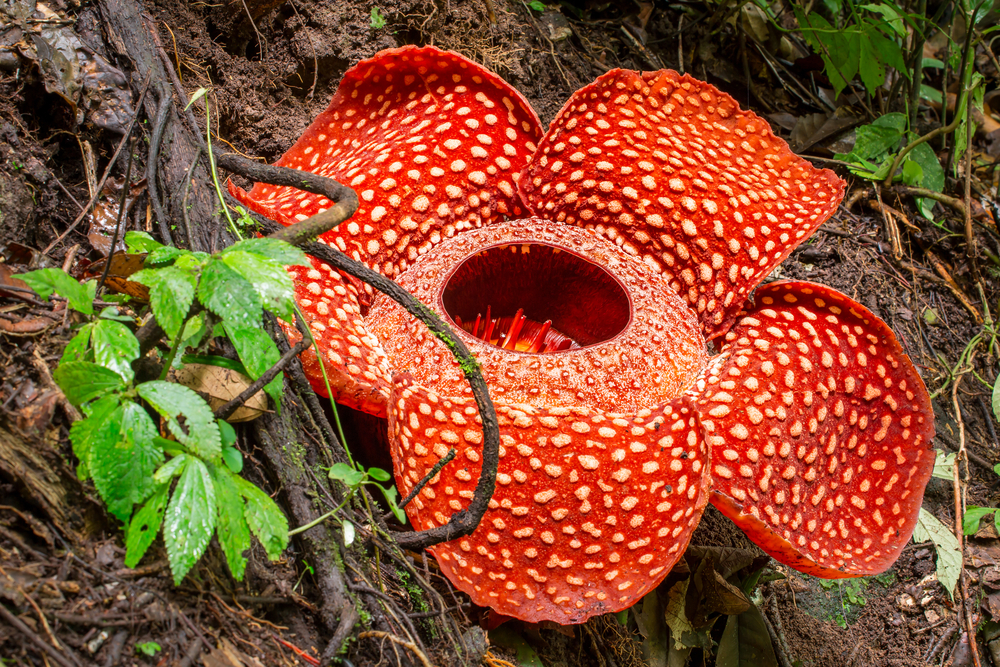 This is Rafflesia arnoldii, otherwise known as the corpse lily or corpse flower. It is often confused with another ‘corpse flower’ called Titan arum, which gives off a corpse-like scent, but unlike Rafflesia, Titan arum is made of many tiny flowers.

These mysterious flowers can be found in the rainforests of Southeast Asia, and is one of the three national flowers of Indonesia.

Why Is Rafflesia arnoldii So Special?

Rafflesia is the largest flower in the world, weighing around 7 kg and capable of growing more than a meter across. This plant not only smells disgusting, but is also a parasite that lacks any stem, roots or leaves – everything that usually defines a plant! This smelly parasite also doesn’t have any chloroplasts, making it one of the few types of plants that can’t perform photosynthesis. Instead, members of Rafflesia have turned to a life of crime and steal all the nutrients they need from other plants.

They depend on plants such as Tetrastigma vines for their survival, as they cannot photosynthesize and make their own energy. Since they only bloom for a few days (3-5 days), they have developed quite a strange system for reproduction.

Why is it So Stinky?

Unlike you and I, members of Rafflesia are very good at deception. They have evolved a skillful tool to fool insects into helping them with pollination. This flower releases chemicals like sulfur that mimic the smell of rotting flesh, hence its other popular name—corpse lily or corpse flower. This nasty smell fools carrion flies into thinking they are heading towards large animal carcasses.

Some scientists believe that the flower’s huge size helps trap the flies for a short time, increasing the chance of pollination. The flowers also produce a great deal of heat to aid in carcass mimicry, while their large size enables heat regulation.

Another special thing about these flowers is that their pollen looks like snot. The pollen of Rafflesia species is a gooey sludge that dries on the back of the flies, making it easy for the insects to carry it long distances for pollination. This increases the chances of fertilization, as the flowers only bloom for a short period of time.

These plants also get rid of genes they don’t need. Molina and her colleagues investigated other species of Rafflesia in their 2014 study published in Molecular Biology and Evolution. They stated that Rafflesia lagascae has lost portions of its chloroplast genome. Davis confirmed this finding in another independent study published in Current Biology. It’s likely that Rafflesia has lost these genes due to its life of crime and no longer uses chloroplasts for photosynthesis and energy production because it simply doesn’t need them.

The Corpse Lily is a wonderfully disgusting plant that continues to fascinate scientists with its ability to steal and sustain for years. Unfortunately, their numbers are dwindling, and efforts must be made to conserve them. In spite of being a parasite and a truly weird plant, Rafflesia can still teach us so much more about genomics, and help us unlock the secrets of our own DNA!