Pressure group is generally a group of persons who are structured and enthusiastic to promote or shield their common interest. The phrase ‘pressure group’ is used as the group which tries to transform the public policy by exerting pressure on the government.

Pressure Groups are also called Interest Groups or Vested Groups. There is huge number of formal /informal groups that influence the institution of any nation, from the foundation of government itself to day-to-day governance matters. Superficially, all the formal and informal associations jointly called ‘Interest Groups’ because all groups have conferred interests related to the general governance of the country. Interest groups are plentiful and of many kinds but whenever they become active in order to accomplish their interests by their attempts of persuading the public affairs at administrative or legislative level they are termed Pressure groups.

The pressure groups dissimilar to the political parties are formed to solve their immediate problems. They are comparatively more temporary than political parties. A pressure group may appear for a short time if it does not present any long-range program. However, where the interests of the group are of long-range, the pressure group may also last longer. In such cases it may even project the sectarian interests as general or universal interests. It depends on the imagination of their leadership.

The study of pressure groups within a theoretical framework establishes an interesting as well as major subject of Indian politics that has been chosen by well-known writers in various phrases. It highpoints those fundamental forces and processes through which political power is organised and applied in organized societies, preferably in democracies. It does not infer their total non-existence in a society having an authoritarian system for the simple reason that even in a totalitarian order such groups exist though they are highly restricted and thereby “serve only as instruments of the state for securing ends which are state-determined, or they may become part of the frontage of government for legitimizing decisions.

A pluralistic society, with a democratic order, identifies their existence and ensures broadest possible contribution to the extent of making them the principal opportunities of activity out of the ‘official administration’. A totalitarian order encourages and permits them to work in a particular direction affable to its own interest. However, important fact is that in every society, whether democratic or totalitarian, interest groups seek to influence public policy in a desired direction without being ready to accept the responsibility of public office as well as by declining to hold direct responsibility for ruling the country.

It is established in studies that pressure groups find favourable policy decisions and administrative natures. They tend to regulate the form of their activities not so much to the formal constitutional structure of governments as to the distribution of effective power within a governmental machine. Thus, the form of group politics is determined by the interaction of governmental structures, activities and attitudes vis-a-vis the scope or intensity of their interest. In other words, the form and nature of group polices is conditioned by the structure and administrative agencies, activities of the political organization and attitudes of governmental agencies towards them. A pressure group may undertake a very important, powerful and well-organised post even at the national level if the work of policy-making and its implementation is assigned to the central branch of administration (W.N. Coxall, 2014).

It is said that the outlooks of administrative organisations towards pressure groups also play a vital part. If popular ministers and elected representatives occupying legislative seats are very receptive to the demands of these groups, they feel a sense of preferred access to the government. Contrariwise, when the management is of an authoritarian or of a traditional or conservative type working to the disadvantage of a particular group in a single dominant political party or a military regime, the groups may develop a feeling of displeasure and start operating through more inconspicuous channels (W.N. Coxall, 2014).

Nature of the pressure group:

Pressure groups may take help of media to transmit their views in public and win support. They may publish statistics in favour of their claims. However, sometimes they may even resort to unlawful and illegal methods like strikes, violence or even bribes.

When elaborating techniques of Pressure groups in India, it can be said that they make use of conventional procedures like invoking caste, region or religion based loyalties in key persons keeping in view their background based on these parameters. Modern techniques of pressure groups include lobbying, funding political parties and supporting favourable person in legislature in addition to key administrative posts.

Since independence, there was supremacy of single political party over government for long time and role of pressure groups was restricted. These groups are visualized negatively but presently their role are taken to be constructive and self-governing.

It is observed that in present scenario, majority of political parties do not have any clear nationalist philosophy & they remain supported by certain groups especially religious and minority communities.

It is also heard that there is presence of foreign lobbies in parliament (e.g. lobbying by US companies in case of FDI). Institutional pressure groups such as FICCI, CII also influence policy judgements.

Pressure groups are more concerned on administration instead of policy decisions. They attempt to influence general administration.

Pressure groups make use of party policy to propose their matters but they do not align with any specific political party for long.

There are some groups which are sponsored by political parties themselves such as Youth Congress, ABVP, and SFI etc.

There are some groups that continually developing and dissolving according to situations or for specific purpose. For example, anti-dowry, anti-sati.

Pressure groups use several ways to promote their cause. Demonstrations are an example of direct action, which may or may not have an effect on a government. Petitions are another way to raise awareness among politicians of public feeling about a specific issue. Media advertising may also be used to attract public sympathy and this may help the pressure group in its efforts to influence the government.

They influence government through Direct Mailing. Pressure groups can send mail to thousands of people to gain finance and support and raise awareness of their concerns.

Letter writing encourages people to write to government to discourage sectarianism. Pressure groups use mass media to transmit their views. When Trade Unions protest the media often reports on the events which often have thousands of people in attendance. 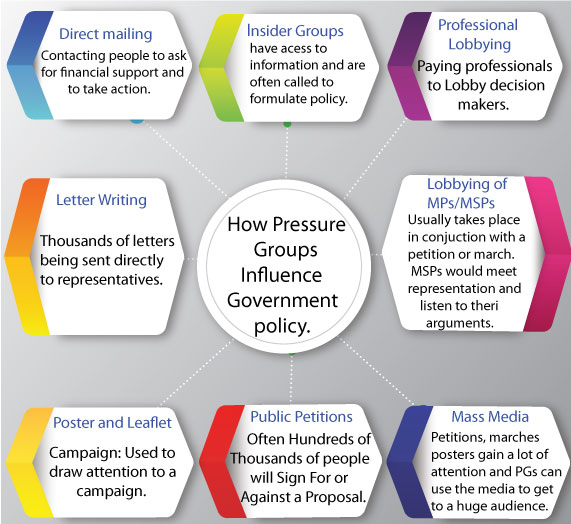 Pressure Groups in India: There are several pressure group in India.

Rights and responsibilities of Pressure Groups: 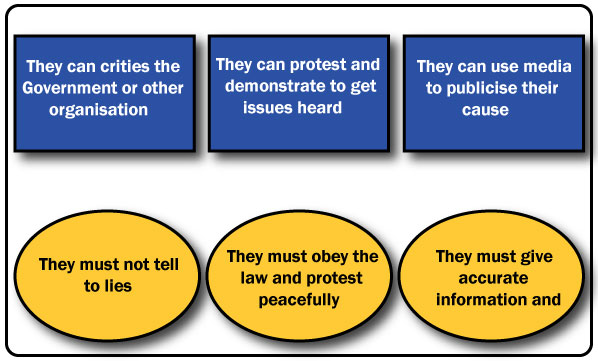 Merits and demerits of pressure groups: There are some merits of forming pressure groups. It is realized that to get success in democratic system, there is a need to generate a public opinion, so that policy in question may be supported or condemned. Pressure groups support to train people, compile data and provide specific information to policy creators. In this way, they work as an informal source of information. Active constructive participation of numerous groups in polity helps to reunite general interest with individual group interests.

Besides, benefits, there are some negative aspect of pressure groups. Sometimes, these groups have biased interests limited to few members. Most pressure groups except business groups and big community groups do not have independent existence. They are unsteady and lack promise, their devotions swing with political situations which intimidates general welfare. In some situation, these groups resort to un-constitutional means such as violence; Naxalite movement started in 1967 in West Bengal. Since pressure groups are not elected, it is not good that they decide crucial policy decisions in egalitarianism.

It is observed in social scenario that some pressure groups are more successful than others. Success factor in pressure groups is appraised by the group’s capability to affect government policy, raise an issue in the political agenda and the ability to change people’s values, perceptions and behaviour. To accomplish these powers, it is considered that a pressure group needs wealth, size, organization and good leadership.

Another factor that give success to pressure group is money. Wealth provides pressure groups huge financial and economic power. This means that the government must seek their cooperation, regardless of their philosophical beliefs. Business groups are the most powerful of all of these as they are the main source of employment and investment. Because the governments listen to them, they have effectively achieved the ability to affect government policy.

Other success factor is group strength. Large pressure groups can claim to represent public opinion. Huge groups also have philosophical power as large memberships allow groups to organize political movements and protests. From this they can rally support, raise mindfulness and eventually, change people’s ideologies to lean towards their causes or interests.

Pressure groups increase the accountability of decision makers to electorates if enough influence is made. Although it is irrefutable that pressure groups have significant role in politics particularly in today’s less differential society, perhaps it is not the suggested one of the pluralist model. It is also visualized that pressure groups improve participation but in an uneven way, benefiting the powerful and organised and disadvantaging the weak and unorganised. The groups themselves may not be representative of their members as many members’ views are ignored if they do not obey with the ideologies of the leaders or decision makers of that group. The methods of influence by some groups use are to increase social dissatisfaction and political unpredictability by increasing social frustration and injustice felt by certain sections of the population. This can ignore the good of the whole of the community and this kind of civil disobedience cannot be defensible in democratic system.

In brief, pressure groups can detract to strengthen democracy to a certain extent. Pressure groups are an important dimension of any democracy, yet they can imperil it if sectional groups weaken the public interest or if the methods they use are immoral or threatening.