Ethics are explained as the moral principles and values that oversee the actions and decisions of a person or group. They serve as guidelines to act rightly and justly when faced with ethical problem. Ethics in marketing denotes to the practice of marketing in business in an ethical and moral way. It means intentionally applying standards of justice and represents the company to others. While the objective of any business is to be money-making, if a company has to use counterfeit advertisement, or misleading or objectionable marketing tactics to attain it, it’s really not running a successful marketing campaign. There can be short term gain in doing something unethical. Researchers stressed on the fact that acts in an ethical manner will get in long-term rewards for their actions. Doing business in ethical way can build loyal customers, get more referrals, and will be building a positive image about their business. Marketing has the potential to influence beliefs and behaviours. It is important to maintain high ethical standards to protect the interests of customers and the public, and the reputation of clients. Marketing ethics has been developed with reference to business ethics that reflect interest of various stakeholders. These ethics describe principles that are acceptable in marketplace. Marketing is an activity which is at the front of business activities with regular interfaces with customers and general public (Chonko 1995). The non-adherence to moral practices in marketing has paved way for two major movements such as consumerism and environmentalism (Kotler and Armstrong 1996). These groups have started exerting pressures on marketers to consider and act in an ethical manner. Interest in ethical concerns in marketing has, considerably heightened (Hunt et al.1984). There is no overstatement in mentioning that researches in marketing ethics have become a precursor of researches in ethics in other areas.

Murphy and Laczniak (1981) in theoretical analysis stated that “the function within business firms most often charged with ethical abuse is marketing.”They recognized several areas where research in marketing ethics was essential. In 1989, Tsalikis and Fritzsche (1989) reviewed the literature on marketing ethics. Later, Gaski (1999) conducted thorough research of marketing ethics and categorised the marketing ethics literature as falling into (a) introduction to ethical problems, (b) questioning the inherent ethics of marketing activity, (c) empirical studies of ethical beliefs and (d) direction and advice for making marketing more ethical. 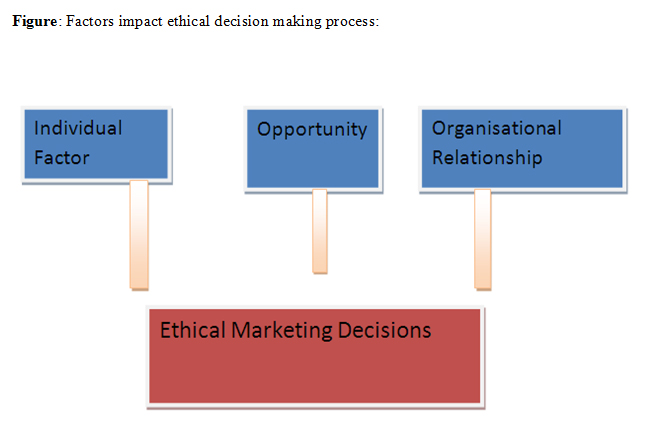 “Marketing is human activity directed at satisfying needs and wants through exchange process” (Kotler and Turner, 1981). Attribute of marketing is to give the satisfaction of the needs of consumers. Since the fulfilment of consumers’ needs is the major goal of marketing, it is considered that the principled approach which dominates is, for the most part, utilitarian. Additionally, since the satisfaction of the needs of one’s fellow man is in itself nearly undeniable ideal, marketing managers tend perhaps to concern themselves less with the way in which this ideal is attained, thereby neglecting the deontological facet of their actions. This image of marketing has already been suggested by Fritsche and Becker (1983) and by Fraedrich et al. (1991). Briefly, since the propensity in marketing is basically utilitarian, one is often inclined to believe that, on this level, it is highly ethical.

A certain inconsistency emerges from the research of ethics in marketing. On the one hand, it is dominated by utilitarian perspective, assures managers of a clear principles since they can consider the consequences of their conduct as ethical. Alternatively, a utilitarian viewpoint does not necessarily mean that marketing is ethical. As for marketing’s deontological aspect, this does not seem to be a major concern for the majority of practitioners. Codes of ethics have also been proposed as a means to accomplish high ethical standards in business. The American Marketing Association has a general code of ethics for marketers. Similarly, many major companies have also developed codes of ethics. Murphy and Laczniak stated that “corporate codes are somewhat controversial”, as to their effectiveness in resolving ethical conflict.

Issues in ethics of Marketing

Marketing has gripped with ethical mistreatment because marketing manager face some of the most difficult ethical problems in business. Ethical problems occur only when an individual interacts with other people. Ethics can be viewed in terms of the needs of’ the individual and the needs of applicable others. The value system of each individual consists of perceived sets of obligations toward others. Baumhart (1961) recognized the major ethical problems that must be removed from business process such as 1. Gifts, gratuities, bribes, and “call girls,” 2. Price discrimination and unfair pricing, 3. Dishonest advertising, 4. Miscellaneous unfair competitive practices, 5. Cheating customers, unfair credit practices, and overselling, 6. Price collusion by competitors, (7) dishonesty in making or keeping a contract, and (8) unfairness to employees and prejudice in hiring.

Ethical conflict occurs when people perceive that their duties toward one group are inconsistent with their duties and responsibilities toward some other group (including one’s self). They then must attempt to resolve these opposing obligations. Basically, Ethical conflicts in marketing can mainly arise in two contexts; firstly the difference between the needs of company, industry, and society. Secondly, the conflict arises when the interest of individual and organization vary (England, 1998). Bartels succinctly states “the nature of ethical conflict: In a pluralistic society not one but many expectations must be met. Therefore, resolution of what is right to do produces a balance of obligations and satisfactions. Ideally, full satisfaction of the expectations of all parties would constitute the most ethical behaviour. This is impossible for expectations are often contradictory and sometimes exceed social sanction. Therefore, skill and judgment must be used to guide one in determining the point at which his own integrity can be best maintained.” Marketing ethics denotes morals and standards relating to marketing practices, including those related to ‘four P’s of marketing’ and ‘marketing research’. The first few editorials on ethical issues in marketing published in the 1960s 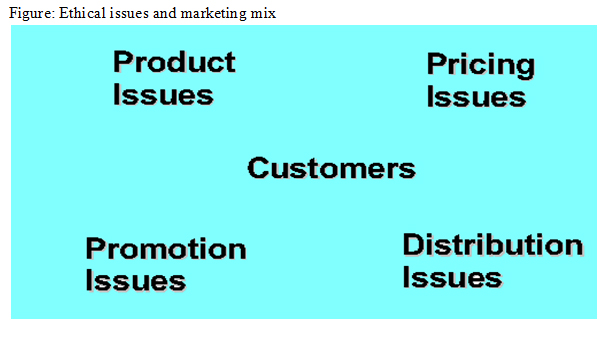 Product issue is that it may be harmful and Fail to disclose information about product. Pricing issues emerge when competitors making same product jointly to determine the price and manufacturers force retailers to charge high prices. Company set low price to eliminate competitors. Promotion issues are associated with deceptive advertising when the consumer is led to believe something which is not true. There is an exaggerated claim of a product’s superiority statements that may not be literally true. There are some distribution issues like Slotting allowances in which fee paid by manufacturer to retailer in exchange of keeping their product in their shelves. Grey market goods where foreign made products imported into countries by distributors that are not authorized.

One of the major functions of marketing is the process of communicating the products or services to the prospective customers. Every firm attempts to market their products, service in an efficient and effective way. Advertising is an area which would need rigid laws and code of conduct when it comes to the style, content and delivery aspects. The ethical standards has been utilized entirely by marketing experts but when it comes to actual decision making, it is observed that very less indication in regards to the adoption of ethical principles is seen. One of the areas where it applies to a larger extent is Ambush marketing which is an effort by a company to relate its own brand to a sponsored activity without acquiring official rights. Doust (1997) proposes that the degree to which a company agrees to “back off a bit’ will to a large extent be determined by its own code of ethics, and by whether that company views ambush marketing practices as unethical or simply good business sense”

To summarize, the ethics of marketing and its bond with the clients forms a basis to the victory of the organization. Ethics are the honest values and principles that govern the actions and verdicts of an entity or cluster. It is normal that customers anticipate to be treated in a fair manner and with regard. Reliability of service, trustworthiness, responsiveness, understanding and reception of value addition to products are some of the expectations of the customers. They do not want unrealistic promises, or deceptive offerings. There are some ethical dilemmas for marketers to meet expectations of customers. Ethical issues arise due to the dissimilarity between the individual and company’s values and norms. When the products are not disclosed properly then they are dishonourably marketing their product. To control these unethical behaviours are by control them properly and then by making sure that everyone follow it. If someone does not follow rules then the proper actions must be taken against them for breaching the codes of conduct. In sum, marketing ethics indicates that there should be an apparent understanding of what is right and what is wrong in business.