What Do Your Stomach Pains Mean?

What a lot of us refer to as stomach aches or tummy troubles can indicate many different things that are happening in the abdomen, not all of which actually affect the stomach. Usually, the discomfort we’re feeling is due to a bit of indigestion or gas, or an uncomfortable but fairly harmless intestinal virus (the ‘stomach flu’). But certain symptoms may signal something more serious. If you experience any of these pains—or any abdominal pain that’s severe or persists beyond a few days—see a doctor so you can get your digestive tract running smoothly again:

Heartburn: Burning pain in the centre of the abdomen.

This feeling is all too common after a big greasy meal. The keyword is ‘burning’, says Lawrence J. Brandt, MD, a gastroenterologist at Montefiore Medical Center in New York. And it’s typically coupled with a bitter taste in your mouth. Acid reflux is the regurgitation of partially digested liquids or foods that have mixed with stomach acid. This acidic mix makes its way into the oesophagus and throat, causing a burning sensation. Occasional heartburn is nothing to worry about. But chronic heartburn—known as acid reflux or gastroesophageal reflux disease (GERD)—can lead to more serious problems, including damage to the oesophagus, if left untreated. An over-the-counter antacid should immediately dampen heartburn symptoms. If it doesn’t, you might be dealing with something else.

Ulcer: Dull burning pain, often in the upper part of the abdomen.

This is the hallmark sign of a peptic ulcer and usually comes with bloating, burping, poor appetite and weight loss. The pain can often be relieved by eating or by taking antacids. Peptic ulcers are sores on the lining of the stomach or top of the small intestine. And despite what you’ve likely heard, they’re not caused by stress. Instead, you can blame one of two major culprits: Helicobacter pylori (or H. pylori), a bacterium that damages the mucous coating of the stomach, or the over-use of nonsteroidal anti-inflammatory drugs (NSAIDs) such as aspirin and ibuprofen. Symptoms such as nausea, vomiting, blood in the stool, chest pain or back pain indicate you should see a doctor right away.

Appendicitis: Sharp pain in the lower right side of the abdomen.

This kind of ‘stomach’ pain could spell appendicitis, especially if you also have a low-grade fever, constipation or diarrhoea, nausea and vomiting, according to the Mayo Clinic. If you do have appendicitis, the pain will likely increase whenever you move around or take deep breaths, cough or sneeze. Appendicitis happens when the appendix becomes inflamed and filled with pus, often from an infection. Treatment requires surgery to remove the appendix before it ruptures and spreads infection throughout the abdominal cavity. 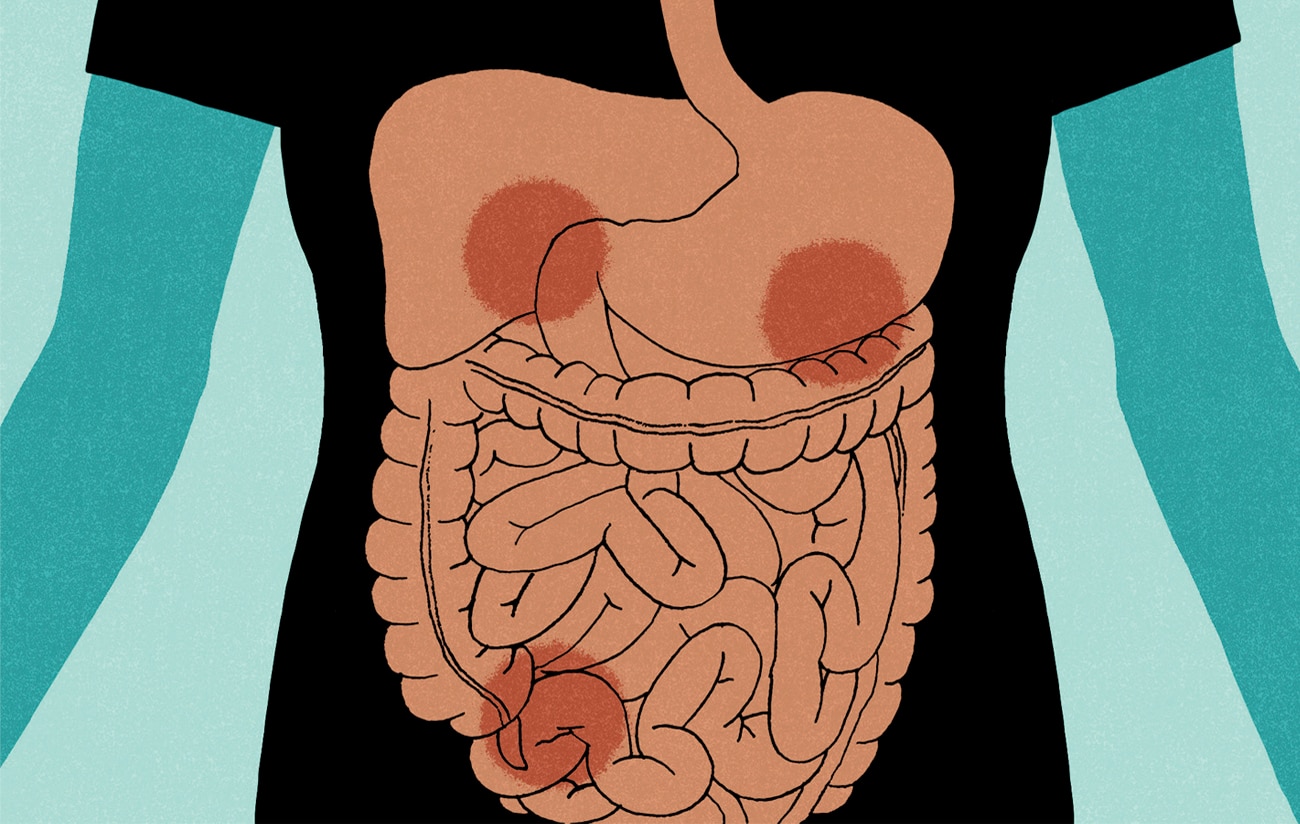 If you’re experiencing ongoing abdominal pain accompanied by bloating, gassiness and a change in bowel habits—either constipation or diarrhoea—it could be irritable bowel syndrome. “IBS is probably one of the most common gastrointestinal disorders that a gastroenterologist sees,” says Brandt. Though the cause is unknown, problems in brain-gut communication may contribute. The condition shouldn’t cause weight loss or rectal bleeding, says Brandt. Those are signs that something else is going on.

Gallstones: Discomfort around the belly button

If this type of pain is coupled with dull pain near the shoulder and seems to act up after eating fatty meals, gallstones may be to blame. And if you’re female and older than 40 and you’ve children, you’re at greater risk than the rest of the population. This is because spikes in oestrogen, common during pregnancy, may cause these tiny stones to form in the gall bladder. Gallstones can go undetected for years and are generally painless unless they got stuck in the cystic duct (a tube that connects the gallbladder with another tube that carries bile from the liver), says Brandt.

Diverticulitis: Sudden pain in the lower-left area of the abdomen

If such abdominal pain strikes suddenly, along with gas, it may signal diverticulitis. This is another form of inflammation, this time of small pouches called diverticula, which can form in the large intestine. Diverticulitis is a fairly common gastrointestinal disorder among older adults and is usually caused by eating a diet too low in fibre. Most people don’t have any symptoms, but when symptoms do occur, they usually include abdominal pain on the left side, fever, nausea, cramping and a change in bowel habits(constipation or diarrhoea)