Power and politics are considered as major aspects of organization. Power and politics play a huge role in industry and govern how to make decisions, interaction of employees with one another. Both concepts fundamentally influence the behaviour of individuals and group and assist in problem solving in organizational setting. In businesses, the impact of power depends on whether workers use positive or negative power to influence others in the workplace. Politics may directly influence who has the power and decide whether the overall culture of the workplace supports productivity. Robbins (1984) described power as a capacity that one person has to influence the behaviour of other person. Power is the medium through which numerous conflicts are resolved (Morgan, 1996). The notion of power characterizes interactions among people more than one person must be involved. Further, power is never absolute or static. It is a vibrant relationship that changes as situations and individuals change. For example, a manager may strongly influence the behaviour of one subordinate but, at the same time, only slightly influence another. Managers may be influential with respect to their own subordinates, yet be unable to influence the behaviours of employees in other departments. Power relationships are the medium within which business is conducted. People often take these relationships for granted, but when they shift, everything changes. In literature, Max Weber defined power as “the probability that one actor within a social relationship will be in a position to carry out his own will despite resistance.” Along similar lines, Emerson suggests that “The power of actor A over actor B is the amount of resistance on the part of B which can be potentially overcome by A.” Power appears to involve one person changing the behaviour of one or more other individuals particularly if that behaviour would not have taken place otherwise.

Sources of power in organization 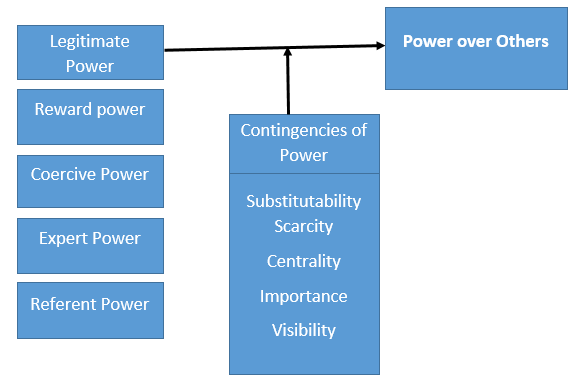 The sources and use of power at the level of group or organizational department has great value in organizational behaviour. They reflect organizational activity, structural /configuration and power issue not at the level of individual but horizontally between departments and functions within organization. Saunders and others (1990) said that power at departmental level derives from five potential sources. These include dependency, centrality, financial resources, non-sustainability and coping with uncertainty. The most successful leaders use mostly referent and expert power. To develop leadership abilities, it is important to build these types of power, so that leaders can have a positive influence on their colleagues, team, and organization. 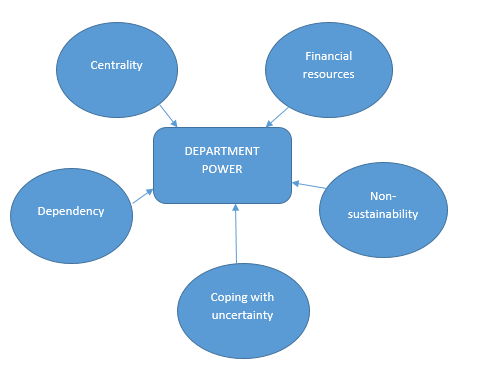 Power is the opportunity to develop and nudge history in different locations. Positive power in an organization involves encouraging efficiency. This includes giving employees the power to make decisions, rewarding workers for strong performance and appointing employees who perform strongly to control other employees. Positive power builds employee confidence and encourages workforce to work harder. It also results in those in higher-level positions gaining power through worker respect and communication, rather than coercive efforts. Employee withholding rates are high when employees are given the power to express concerns and work together in an organization. When leaders in an organization do not have the admiration of the employees under them, they have a negative power. This type of leader stimulate employees to perform by intimidating them with job loss and other punishments or shows partiality to certain employees rather than recognizing the hard work of multiple workers. Not only does the quality of work produced reduce under this type of power, but it leads to higher turnover rates in an organization. Power, and the struggle over it, describes the core of the political process. Kotter (1979) documented that the open seeking of power is broadly considered a symbol of awful management. 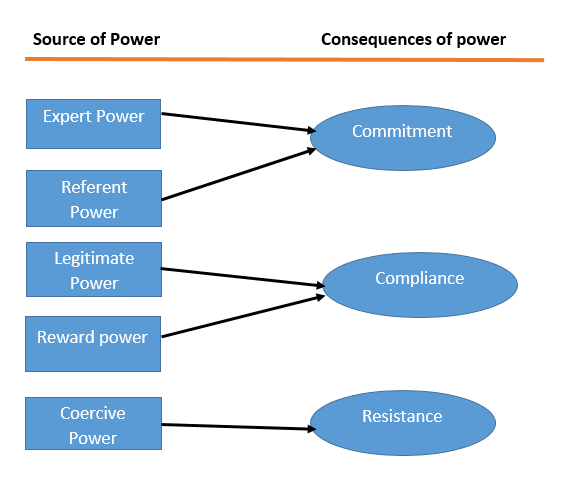 Use of power: When managers, employees, or teams want to influence the behaviours of others, they must decide a strategy. Influence strategies are the methods by which individuals or groups attempt to exert power or influence others’ behaviour.

Politics is common phenomenon in organization. It is used by people or group to gain power. Organizational politics involves those activities by organization, to acquire, develop and use power and other resources to get desired results in ambiguous situation (Pfeffer, 1981). Politics can be considered as a process of bargaining and negotiating that is used to overcome conflicts and differences of opinions. Political activity in organization results from conversion of power into action. It is the consequence of diversity of interests that exist in most human communities and more directly from attempts to use power to affect organizational decision making or from activities which are self-serving and not organizationally sanctioned. According to Tushman, politics refers to structure and process of the use of authority and power to affect the definition of goals, directions and major parameters of the organization. Miles described that organizational politics is the process whereby individual or groups use whatever power they can accumulate to influence organizational decisions in the direction of their own interests. Drory and Romm defined politics as intentional behaviour that are designed to enhance and project person’s interest and self-influence. It is established that political behaviour has some kind of power which can be used by those who have some formal positions and authority.

Organization politics is widespread due to several reasons. First is competition for power. Political behaviour develops as people want to derive power for their work satisfaction. Competition is required to grab power as resources are limited. Second reason is authority. During special needs or emergency, organizations provide discretionary authority to certain people. They use it at their individual judgement and create organizational politics. Ambiguity is the third reason of politics in organization. When roles and authority is not clear in organization, politics develops. People do mutual interactions to show better performance. Promotion is another reason for politics. Political behaviour also occur when an employee reaches his saturation point in his talent and skill.

Workers who learn to steer the politics of an organization are more creative than those who are left out of the circle. To promote productivity, organizations develop a political culture for workforce to recognize. Establishing clear policies and chains of command makes it easier for workers to find the answers they need and spend more time to give best results. A climate focused on teamwork and equal treatment prevents clash that can reduce output. Organizations that develop climates of negativity and conflict suffer as a result. If employees are motivated to engage in deceitful or unethical behaviour to get ahead and favouritism trumps the quality of work, there is decrement in productivity and higher turnover rates. An organization without clear policies and chains of command leads to employees spending more time searching for answers and attempting to fix problems than in fact completing quality work. 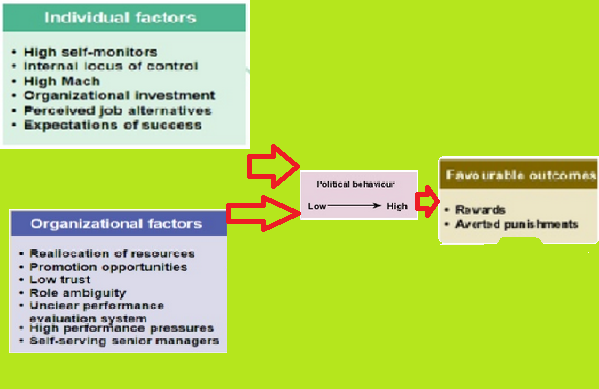 To summarize, Power and politics are significant beliefs in the study of organization behaviour. Both power and politics are lively conceptions and are a function of the communication between different elements in organizations. Power is explained as “the ability to influence and control anything that is of value to others. It is the capability to influence the behaviour of other people in the organization and to get them to do what they otherwise would not have done. Politics is a ways of recognizing and, ultimately, reconciling competing interests within the organization. Political behaviour may take many forms. It may comprise passing a chain of commands, withholding information, spreading rumours, leaking confidential information, lobbying, using pressure tactics.