It has been observed that Management decisions in many organizations involve to make appropriate use of resources such as machinery, labour, money, time, warehouse space, and raw materials, in order to produce products like computers, automobiles, or clothing or offer services such as package delivery, health services, or investment decisions. To solve problems of resource allocation, company adopt the technique of mathematical programming. Linear programming is the most common category of mathematical programming. Linear programming seeks to maximize or minimize a linear objective function subject to a set of linear constraints and assumes all relevant input data and parameters that are known with certainty. Computers are important in the solution of linear programming problems (Sharma, 2006).

In simple form, A linear program include a set of variables, a linear objective function indicating the contribution of each variable to the desired outcome, and a set of linear constraints describing the limits on the values of the variables. Linear programs are problems

Where, ‘x’ signifies the vector of variables (to be determined), c and b are vectors of (known) coefficients, A is a (known) matrix of coefficients, and (\cdot)^\mathrm (T) is the matrix transpose. The expression to be maximized or minimized is called the objective function (cTx in this case). The inequalities Ax ≤ b and x ≥ 0 are the constraints which specify a convex polytope over which the objective function is to be optimized. In this context, two vectors are comparable when they have the same dimensions. If every entry in the first is less-than or equal-to the corresponding entry in the second then we can say the first vector is less-than or equal-to the second vector.

Formulatıng a linear programming problem:
A common linear programming application is product mix problem. Two or more products are usually produced using limited resources, such as personnel, machines, raw materials. Profit firm seeks to maximize is based on profit contribution per unit of each product (Sharma, 2006). Firm would like to determine how many units of each product it should produce in order to maximize overall profit given its limited resources.

For linear programing problems involving more than two variables or problems with large number of constraints, it is useful to use solution methods that are adaptable to computers. Solving linear programing problems graphically is only practical when there are two decision variables. Furthermore, the graphical method becomes cumbersome when there are many constraints. Real-world LP problems typically have thousands of corner points. The appropriate technique in this situation is the simplex method, developed by George Dantzig in 1946. It provides us with a systematic way of examining the vertices of the feasible region to determine the optimal value of the objective function. The Simplex Method is matrix based method used for solving linear programming problems with any number of variables. The simplex algorithm can be used to solve linear programming problems that already are, or can be converted to, standard maximum-type problems.

It is established that the simplex method provides an iterative algorithm that methodically locates possible corner points that will improve the objective function value until the best solution is reached. Regardless of the number of decision variables and constraints, the simplex algorithm applies the key characteristic of any linear programing problem.

The general procedure of simplex method is as follows: 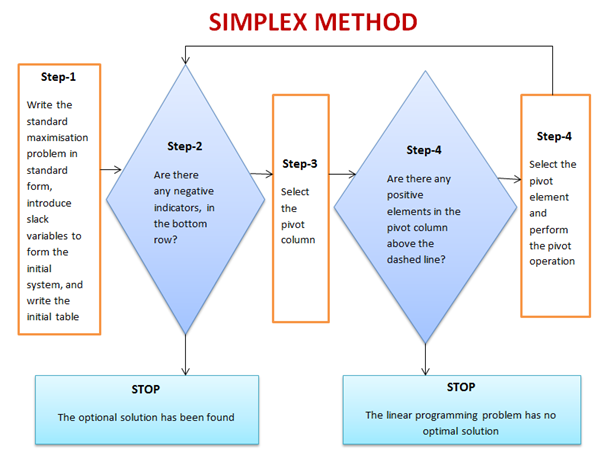 Graphical solution is limited to linear programming models containing any two decision variables. Graphical methods provide visualization of how a solution for a linear programming problem is obtained. Researcher can use graphical methods to solve linear optimization problems involving two variables. When there are two variables in the problem, they can refer to them as x1 and x2, and can do most of the analysis on a two-dimensional graph. Although the graphical approach does not generalize to a large number of variables, the basic concepts of linear programming can all be demonstrated in the two-variable context (Sharma, 2006). 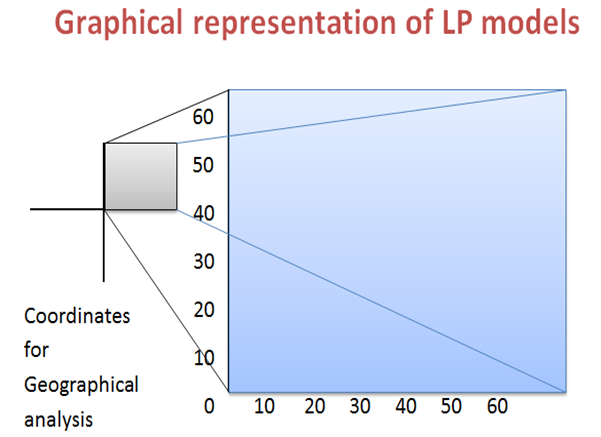 Application of linear programming: Linear programming can be used in various areas of study. It is used in business and economics, but can also be applied for engineering problems. Industries that practise linear programming models include transportation, energy, telecommunications, and manufacturing. It has proved useful in modelling diverse types of problems in planning, routing, scheduling, assignment, and design (Sharma, 2006). In spite of numerous advantages, linear programming has certain limitations:

To summarize, Linear Programming is an important generalization of Linear Algebra. Linear Programming is used to successfully model numerous real world situations. The technique is prevailing and found especially useful because of its application to many different types of real business problems in areas such as finance, production, sales and distribution, personnel, marketing and many more areas of management. The linear programming model include linear objectives and linear constraints, which means that the variables in a model have a proportionate relationship.